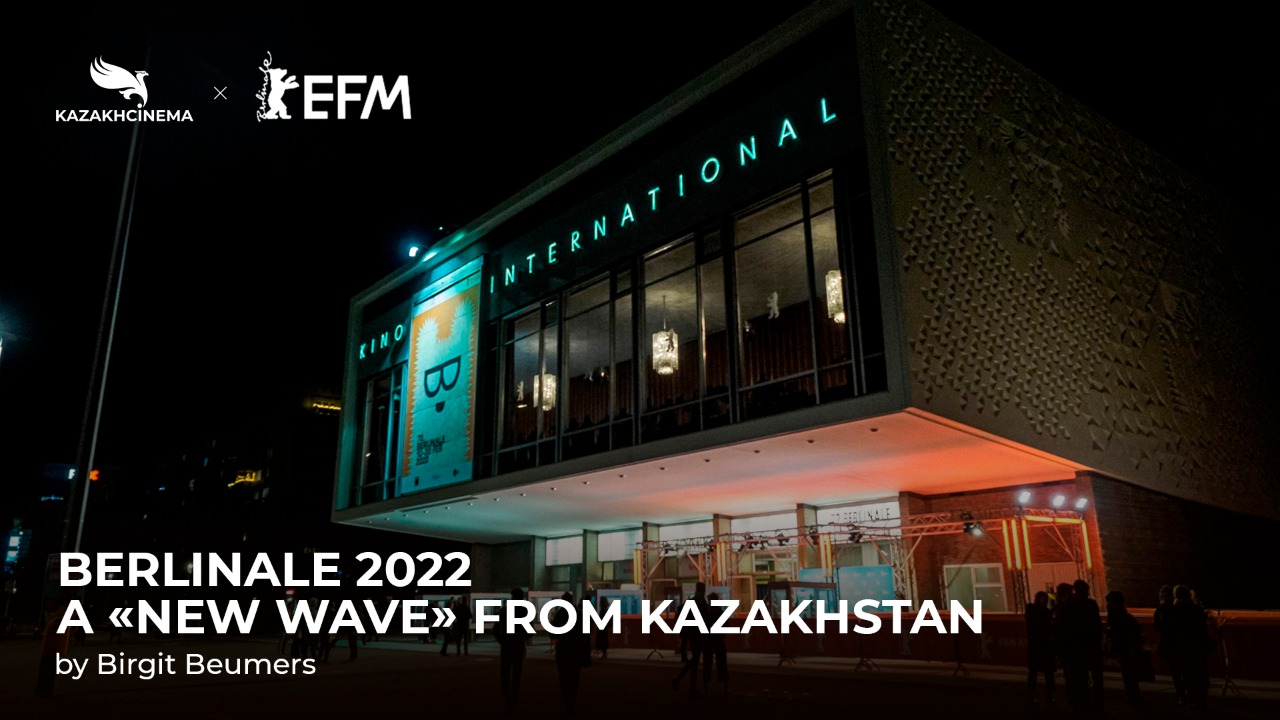 At this year’s Berlinale, the amazingly great presence of Kazakhstani films seemed to suggest a renaissance of the “New Wave,” which brought Kazakh cinema to the forefront of attention back in the late 1980s. The Berlinale selection included three films from directors of different generations: Askar Uzabayev’s film Happiness (Baqyt), which screened in the Panorama section where it won the audience award, and Farkhat Sharipov’s The Scheme (Skhema), which screened in the Generation 14+ section where it won the Grand Prix both represent the work of a younger generation of Kazakh filmmakers. Meanwhile, Darejan Omirbaev’s The Poet (Akyn), which played in the Forum, shows the work of a maître associated with that Kazakh New Wave of the late 1980s.

Such a “wave” of Kazakhstani cinema comes somewhat as a surprise, since it follows not only the New Wave of the 1990s, mentioned above, but also the new-New Wave associated with the Partisan Cinema and its 2014 manifesto, calling for filmmakers to turn their attention to social issues and best represented in the films of Adilkhan Yerzhanov, whose films have, rather strangely, never appeared in any program of the Berlinale. Maybe the appearance of three titles is a shift in attention towards Kazakh cinema. Looking more closely at the films should allow us to understand the selection to a festival that has always focused on social issues.

Let us begin with a film by director and producer Askar Uzabayev, who set up his own studio, 567 Creative Laboratory, in Almaty and produced the first of the Partisan Cinema projects, manifesto Zhasulan Poshanov’s Toll Bar (Shlagbaum, 2015). As director, he is best known for his comedy films, such as Careful, a Cow! (Ostorozhno, korova!, 2014) or The Daughter-in-Law is Also Human (Kelinka tozhe chelovek, 2017), which are audience pleasers. For Uzabayev, the film Happiness is partly new terrain when he ventures into social drama. Happiness was inspired by a story brought to the project by the producer, Bayan Maxatkyzy, a TV blog celebrity with millions of followers. She co-produced the film with the experienced Anna Katchko. This film is a socially engaged and contains some strong visual metaphors, which makes apparent the hand of Uzabayev as a signatory of the Partisan manifesto. Happiness tells the story of a woman who has dreams for her life, even if we see little of them in her everyday life. The film begins with the preparation for the wedding of a girl, pregnant and in hysterics. At home, in her parents’ flat, the bride is dressing with her best friend, the groom’s sister. In the meantime, the groom is getting drunk, the wedding ceremony is at the risk of being called off, while her grandmother is being fed by her daughter-in-law, the girl’s mother and the film’s protagonist. The scene deliberately overstates and exaggerates the treatment of the daughter-in-law, the kelinka (also portrayed in Uzabayev’s earlier films) and shows the datedness of Kazakh traditions, according to which the kelinka has to be obedient to the mother-in-law. The father, who adores his “little girl,” is also getting drunk: a big day with which nobody can cope without alcohol—except for the women, the girl’s mother and the husband’s powerful sister, a wealthy business woman with immense connections who can fix everything—with bribes. The scene is set for the portrayal of a social reality that can only be endured in a state of intoxication. Behind the surface of the fabulous and lavish wedding reception (paid for by the girl’s rich auntie) there are other issues. In this town, a regional center but not the capital, traditions prevail and restrict characters from leading an independent life and realizing their dreams; this is especially true for the women: the kelinka has to obey any orders of her demanding other-in-law; women must not complain of their lot; the young couple have no chance of getting their own apartment but have to live with his parents. While the husband and wife (mother and father of the bride) run their little businesses, food production for the husband and cosmetics sales for the wife, their everyday life conceals domestic violence. When the wife announces her desire to divorce (so the husband can find a younger girl, and will stop beating her), the husband beats her up so badly that she ends up in hospital, her face stitched up across her cheeks and her eyebrow. However, she refuses to file a law suit, knowing that no case of domestic violence in Kazakhstan has ever led to a conviction. So, the couple remain together. In permanent fear, she locks herself up at night in the daughter’s room. The inevitable and predictable happens: another assault, in which she is raped with a hammer she had bought to bolt up the room. When she gets a grip on herself, she uses the hammer to stop and silence her husband. She is arrested: her husband survives, which means she gets a suspended sentence. The husband is disabled and bound to a wheelchair, which means that she becomes his carer without the right to move from the apartment. The rich sister, in the meantime, has bribed police and medical staff to drop any charges against her brother. Certainly not a happy ending.

The story is set in a remote town in panel housing by seashore, without much of a pretty setting. The wedding reception is indeed a fairy-tale event, staged and exaggerated in a special location. The most striking image of hope is the orange dress, which hangs on the wardrobe, decorated with a kerchief; along with orange-colored shoes, this outfit makes up the uniform in which she presents the all-orange line of cosmetics that will bring women happiness. During one presentation she breaks down: her scars are barely covered under make-up and none of the pretty little world she sells has remained intact. The hope of liberating herself with the money she earns and moving to the city have gone.

The film ends with a note about the legal background for domestic violence that is not in the penal code of Kazakh law. At the film’s end, the daughter’s baby has been born: a little boy. The girl hands him over to her mother, for her to choose a name: she calls him “Baqyt,” for Happiness. Because it is a boy, who will not have to endure the suffering of women in this society? Or because there is a glimpse of hope for her in the future?

Farkhat Sharipov’s The Scheme (this film is reviewed separately in this issue by Gulnara Abikeyeva) also addresses a social issue, of a different kind but equally hushed up in discourses about modern life. It is about teenagers and addressed at a younger audience, hence its slot in the 14+ program. Sharipov, whose career started in the mid-2000s, is of a young generation of filmmakers, but not associated with the socially engaged Partisan cinema. The phenomenon of Sharipov’s films, especially his portrayal of men in contemporary society, has been discussed by Sergei Anashkin [http://www.kinokultura.com/2019/66-anashkin.shtml]. The Scheme sends a scary message about men and their lack of responsibility through a story about the abuse of teenage girls, who want to “belong” to their peer group, to adult society, to their boyfriends. They have good homes, caring parents, but they lack the stamina and the civic courage to say “no” at the right time, unable to stand up for their own values and desires; and this is not anybody’s fault, but a symptom of society, and a problem not typically Kazakh but universal.

Of a different generation altogether is Darejan Omirbaev, whose early films were not only associated (at least in critical literature) with the Kazakh New Wave, but who is also an internationally recognized filmmaker, with his films Kairat (1992) garnering a FIPRESCI award in Locarno; Cardiogram (Kardiogramma, 1995), screening in Venice; Killer (1998) competing in Cannes in Un Certain Regard; Shuga (2007) playing at Eurasia IFF; and Student (2012) again invite to Cannes. The film The Poet (Akyn, 2021) is Omirbaev’s first film in ten years, and landed in a sidebar program in Berlin after winning the Best Director award at Tokyo IFF.

The film addresses the role of the poet and cleverly intertwines past and present, comparing two epochs. The contemporary poet Didar cannot make a living from writing poetry and has to work as newspaper editor as well. But even though he can make ends meet, the significance of poetry is diminishing in Kazakhstan (indeed, as elsewhere in the world). The screen (computer, television) and social media have taken over. The writer’s own poetry readings remain empty, the organizers of such (outmoded) events are equally infected by commercial and material values. During his train journey through Kazakhstan to such a poetry event, Didar reads a book about the poet Makhambet Otemisuly, which leads us to a visualization of the latter’s biography, and from present-day Kazakhstan into the nineteenth-century steppe, where Otemisuly’s resistance against the sultan costs him his life. Issue of dignity and cultural legacy are touched upon: the responsibility of the poet, the writer, the author stand in focus. In many ways this film rhymes with Paolo Taviani’s Leonora Addio, which played in competition, about the burial of Luigi Pirandello and a filmic rendering of his last story, “The Nail.” The first part of the film follows the writer’s death, the transportation of his ashes to Sicily, framed in the events of the war and accompanied by a humorous narration. The film addresses Pirandello’s quest for a burial according to his wishes, granted only ten years after his death and after the turbulences of WWII. In Akyn, Otemisuly’s remains are excavated in the Soviet 1960s, but they are never taken anywhere, and were buried only in the 1980s… the fate of the poet, for both Omirbaev and Taviani, is one where the writer does not rest. Poetry and literature, meanwhile, are turned into commercial assets and decorative elements of modern life. The interesting and complex narrative construction in both films reflects on the role of art and culture today.

Overall, Kazakhstani cinema as presented in Berlin covers a range of topics, from young people and teenagers to women, and explores the role of culture and the need for its preservation. All films are critical of contemporary life and society, of a place where ethical and cultural values matter no longer or have a crippling effect; and these issues are abstracted to such a degree that the films all work on a universal level rather than a local or national one. That is an important step in the development of Kazakh cinema towards a universal, yet clearly idiosyncratic, film language, no matter of the age and experience of filmmakers.